The United Nations in Ethiopia commemorated the International Women’s Day in a 5-km run that brought together more than 11,000 girls and women. 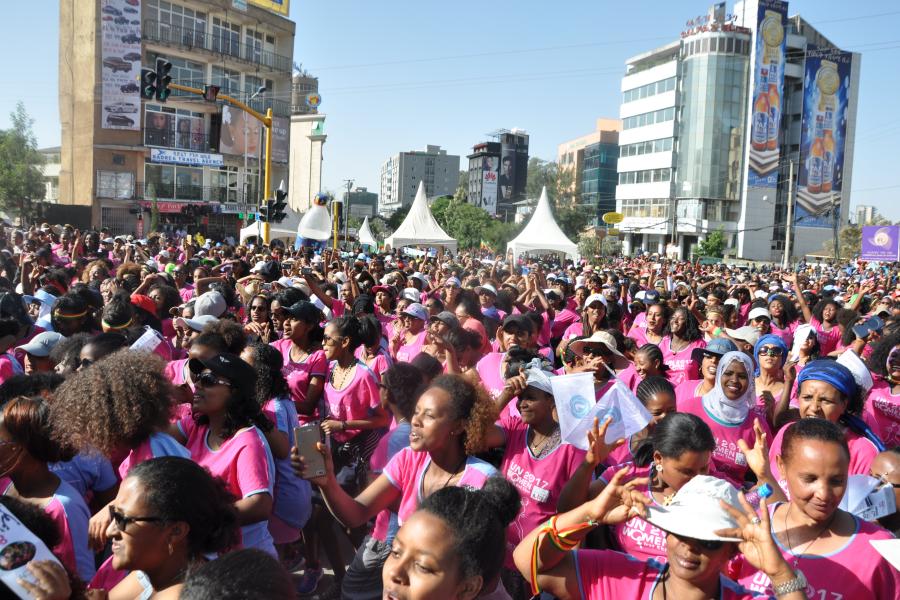 The United Nations in Ethiopia commemorated the International Women’s Day in Addis Ababa in a 5-km run that brought together more than 11,000 girls and women on 12 March 2017.

The United Nations partnered with the Great Ethiopian Run to organize the UN 2017 Women First Run which was held under the theme ‘Because She Can”, highlighting the capability and potential of women to fulfill their dreams and transform societies.

Highlighting the tremendous role women can play to achieve development, participants also called for more action to eliminate all harmful practices and forms of violence against women and girls, give women equal rights to economic resources and ensure women’s full and effective participation and equal opportunities for leadership at all levels of decision making.

Speaking on behalf of the United Nations Team in Ethiopia, UNICEF Country Representative, Gillian Mellsop said, “Sustainable Development Goal 5 calls specifically for gender equality and the empowerment of all women and girls, and this is central to the achievement of all the 17 SDGs.’’

In his message to the 2017 International Women’s Day Secretary-General, United Nations Secretary-General, Antonio Guterres, said, “Women’s rights are human rights. Empowering women and girls is the only way to protect their rights and make sure they can realize their full potential.”

“Despite some improvements, leadership positions across the board are still held by men, and the economic gender gap is widening. We must change this, by empowering women at all levels, enabling their voices to be heard and giving them control over their own lives and over the future of our world,” said the Secretary-General.

“When women participate fully in the labour force, it creates opportunities and generates growth. Closing the gender gap in employment could add $12 trillion to global GDP by 2025. Increasing the proportion of women in public institutions makes them more representative, increases innovation, improves decision-making and benefits whole societies.”