Under the leadership of the UN Resident and Humanitarian Coordinator (RC/HC), who leads the UN Country Team (UNCT) in Ethiopia and coordinates all UN operations at the country level, the UN Resident Coordinator Office (RCO) provides strategic coordination support to the UNCT.

Ethiopia hosts one of the largest UN country teams in the world with 28 specialized agencies, funds and programmes working in a harmonised manner through the joint UN and Government Strategy, the United Nations Development Assistance Framework. It is framed around the Sustainable Development Goals (SDGs) and is in line with the national priorities.

Ethiopia is a “self-starter” Delivering as One country. The UN in Ethiopia has embraced the One UN reform agenda since 2008, with the support of the Government. Delivering as One comprises five elements: the One Programme, the Common Budgetary, Framework, the One Fund (optional), the One Leader, Operating as One and Communicating as One.

The UN Resident and Humanitarian Coordinator in Ethiopia

Dr. Catherine Sozi has devoted more than 30 years to public service. She previously served as the Regional Director for Eastern and Southern Africa at the Joint United Nations Programme on HIV/AIDS (UNAIDS), working for 18 years as the UNAIDS Country Director for Republics of Zambia and South Africa and the People’s Republic of China. 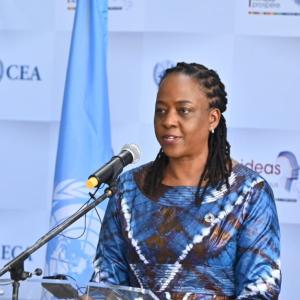