The 26th edition of World Press Freedom Day was celebrated in Ethiopia from 1-3 May 2019 in Addis Ababa, Ethiopia. 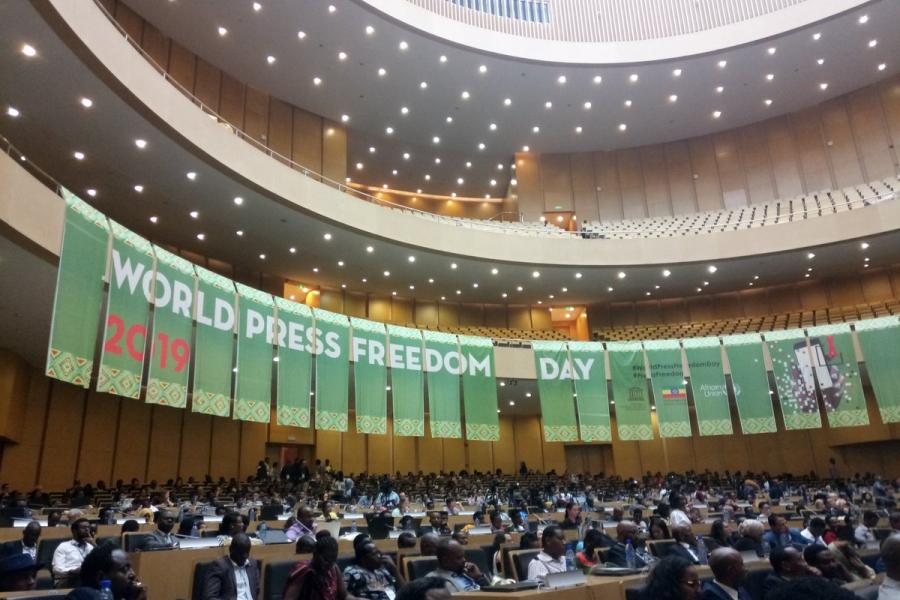 The global event was a reflection of the current social and political transformations in Ethiopia.

Both President Sahle Work-Zewde and Prime Minister Dr. Abiy Ahmed made commitments to promoting and defending press freedom in the country and conveyed their pride in hosting the global celebration.

“The symbolism of this grand gesture is even more important – given that only one year ago Ethiopia was labeled as Africa’s foremost jailer of journalists and one of the most repressive environments in the world for the functioning of independent news”, said Dr. Abiy Ahmed, Prime Minister of Ethiopia.

The event took place on 1 May at the United Nations Conference Center (UNECA) and at the African Union Commission (AUC) headquarters on 2 and 3 May. AUC Deputy Chairperson, Amb. Thomas Kwesi Quartey inaugurated the event together with Dr. Vera Songwe, Executive Secretary of the United Nations Economic Commission for Africa, the UNESCO Director-General Audrey Azoulay, and the President of the Federal Democratic Republic of Ethiopia, Sahle Work-Zewde.

The UNESCO Director-General highlighted media’s contribution to democracy, noting that “by exercising their profession, it is our freedom that journalist and the media defend all over the world”. The AUC Deputy Chairperson reiterated the Commission’s commitment to promoting press Freedom in AU member states “we are optimistic that this WPFD will be an opportunity to draw attention to the great potential of the media, so they can be prepared in supporting the process of peace, freedom and reconciliation in society”. This was echoed by the ECA executive secretary who stressed that “Freedom of the speech is the ultimate trademark of a just society but unfortunately, limited press freedom limited continues to undermine the ability of the media carry out this role”

This year’s celebration also counted on the participation of UK Foreign Secretary, Jeremy Hunt who stated that “the progress of humanity clearly shows that wisdom arises from the open competition between ideas when different viewpoints are given the oxygen to contend freely and fairly”. Hunt also announced his wish to work closely with UNESCO and the African Union within the framework of the UK’s recently launched global campaign to promote media freedom.

This year’s event had a significantly high attendance with almost 2,000 participants registered to attend over 30 sessions which echoed different aspects of the overall theme, ‘Media for Democracy: Journalism and Elections in Times of Disinformation’.

Anticipating the 2020 Ethiopian elections, acclaimed Ethiopian journalist Tsedale Lemma in her keynote speech said: “this year's theme of World Press Freedom Day couldn't have come at a better moment for Ethiopia. Going by the repeated promises of Prime Minister Abiy Ahmed to make the 2020 general elections free and fair, we may be looking at the historic dawn of the true beginning of electoral democracy in which Ethiopians could finally decide on who their representatives should be.”

Maria Ressa, the co-founder and CEO of Rappler, who was arrested this year on charges of "cyber libel”, called for news groups and journalists around the world to come together and ensure that “the true soul of democracy, which is debate based on fact, continues to live on” in a video message.

Within the framework of WPFD, participants also celebrated the importance of freedom of artistic expression, including through the participation of 26 press cartoonists, convened by the association Cartooning for Peace. Several exhibitions, a live drawing mural of press cartoons and a number of discussion panels reflected the close links between press freedom and freedom of artistic expression.

An academic conference gave researchers from all over to world the opportunity to present ongoing research on journalists’ safety. During an interactive lab, media actors brainstormed on effective strategies for tackling online harassment, in particular against women journalists.

The Addis Ababa Declaration was adopted by the participants on 3 May in Addis Ababa, Ethiopia. The document highlights the role of journalism in facilitating peaceful, credible, inclusive, transparent, free and fair elections. The Declaration calls on Member States, including their electoral management bodies to strengthen legal and policy frameworks that guarantee respect for freedom of expression and privacy, and foster a diverse, independent media sector.