A memorial service was held in honour of 33 United Nations and non-governmental organizations personnel who lost their lives in Ethiopian Airlines plane crash. 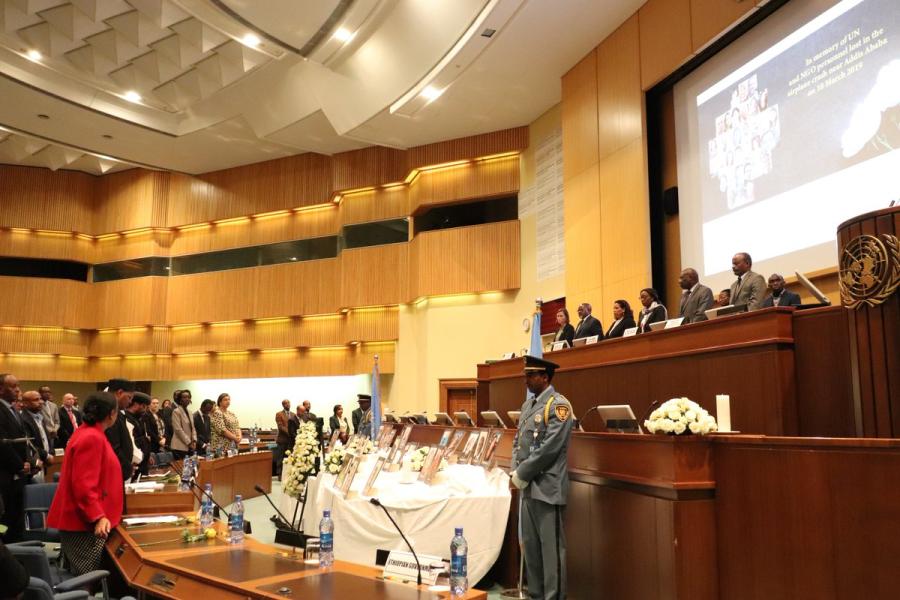 A memorial service was held in Addis Ababa in honour of 33 United Nations and non-governmental organizations personnel who lost their lives in Ethiopian Airlines crash that killed all 157 people aboard.
Photo | Getachew Dibaba UN Ethiopia

Families, airline staff, government representatives, diplomats and others joined UN and non-governmental organizations personnel as they mourned the loss of their colleagues and also celebrated their selfless work serving Africa and the world.

Religious leaders offered prayers after a minute of silence has been observed.

“They all had one thing in common - a spirit to serve the people of Africa and the world and to make a difference in the lives of the people that we serve. It is truly tragic that anyone should perish doing such good and essential work,” she said.

“Today we come together to honour their memory and pay tribute to their service, courage and sacrifices. As we mourn our lost colleagues, let us keep their spirit of service alive and let us join together in solidarity as one United Nations, committed to serve Africa better and the greater good of humanity.”

The United Nations Resident and Humanitarian Coordinator in Ethiopia, Aeneas Chuma, comforted the families and colleagues saying the UN shared “your pain, agony, shock and bewilderment at what happened exactly a month ago.”

“We feel the loss as friends and colleagues of those that have departed. As we mourn, which we must, because it is right to do so, we must also recognize and celebrate the priviledge of having known and worked with our lost colleagues. We honour and cherish their lives and their work on earth, and the blessing of having been with them in different ways and circumstances even though for a short time,” said Chuma

“The tragic accident is one of the darkest moments of our aviation industry,” she said, adding Ethiopia was grateful for all the support and sympathies that have come from far and wide following the crash.

Ethiopian Airlines Vice President responsible for Customer Service, Michael Yared, said results of the ongoing investigation into the crash should be out in the next six months, adding insurance payments were currently being made.

“I offer my heartfelt condolences to the loved ones of the deceased,” he said.