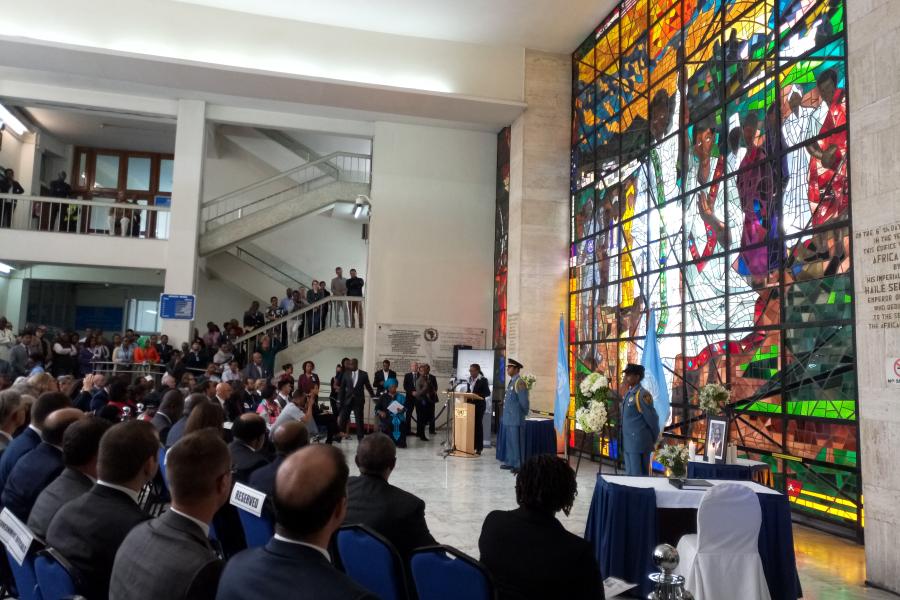 The United Nations Economic Commission for Africa (UNECA) and the United Nations Country Team held a memorial service for the late Kofi Annan who died on 18 August 2018 in Addis Ababa, Ethiopia. The commemoration was attended by senior Ethiopian government officials, UN staff and diplomatic community in Ethiopia.

‘Kofi Annan made us all Africans proud by his tireless service for the cause of peace sustainable development, the rights of women and above all by being the staunch vanguard of the UN Charter,’ says, Prof. Afework Kassu, State Minister of Foreign Affairs, at the commemoration held at the UNECA compound.

Speaking at the event on behalf of UN Country Team, Mr. George Okutho, Director of the ILO Country Office for Ethiopia, Djibouti, Somalia, Sudan and South Sudan, says ‘Kofi Annan is one of African’s great sons and an international leader who has been made remarkable contributions to a more peaceful, prosperous and just world’ at the Kofi Annan Memorial Service.

Mr. Annan was UN Secretary General from January 1997 to December 2006. One of his main priorities during this period was a comprehensive programme of reform that sought to revitalize the United Nations and make the international system more effective. He was a constant advocate for human rights, the rule of law, the Millennium Development Goals and Africa, and sought to bring the organisation closer to the global public by forging ties with civil society, the private sector and other partners.

At Mr. Annan’s initiative, UN peacekeeping was strengthened in ways that enabled the United Nations to cope with a rapid rise in the number of operations and personnel. It was also at Mr. Annan’s urging that, in 2005, Member States established two new intergovernmental bodies: the Peacebuilding Commission and the Human Rights Council. Mr Annan likewise played a central role in the creation of the Global Fund to fight AIDS, Tuberculosis and Malaria, the adoption of the UN’s first-ever counter-terrorism strategy, and the acceptance by Member States of the “responsibility to protect” people from genocide, war crimes, ethnic cleansing and crimes against humanity. His “Global Compact” initiative, launched in 1999, has become the world’s largest effort to promote corporate social responsibility.

Mr. Annan undertook wide-ranging diplomatic initiatives. In 1998, he helped to ease the transition to civilian rule in Nigeria. In the same year, he visited Iraq to resolve an impasse between Iraq and the Security Council over compliance with resolutions on weapons inspections and other matters; this effort helped to avoid an outbreak of hostilities which was imminent at that time. In 1999, he was deeply involved in the diplomatic process that led to Timor-Leste’s independence from Indonesia. He was responsible for certifying Israel’s withdrawal from Lebanon in 2000, and in 2006 his efforts contributed to securing a cessation of hostilities between Israel and Hizbollah. Also in 2006, he mediated a settlement of the dispute between Cameroon and Nigeria over the Bakassi peninsula.

Mr Annan’s efforts to strengthen the Organisation’s management, coherence and accountability involved major investments in training and technology, the introduction of a new whistleblower policy and financial disclosure requirements, and steps to improve co-ordination at country level.