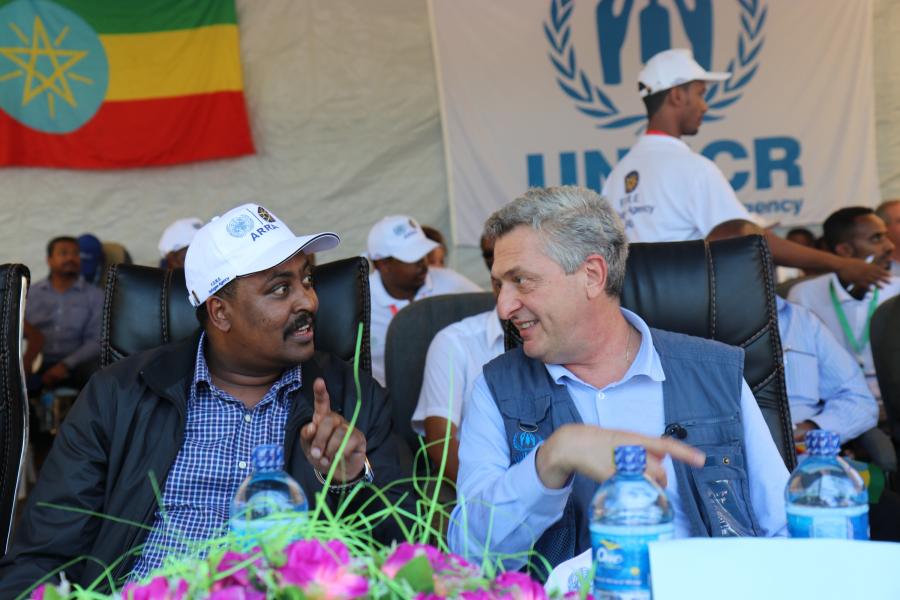 World Refugee Day 2017 was marked in 26 refugee camps across Ethiopia, home to 840,000 refugees, with cultural dances, sports competitions, panel discussions and by signing the #WithRefugees petition.

“I am here in Ethiopia on World Refugee Day to tell the world that it is possible to receive many refugees, to treat them well, to remain stable, and to look to the future,” Grandi said.

The Gambella region hosts more than 360,000 refugees. Hundreds more continue to arrive each day, fleeing violence and hunger in South Sudan. Grandi visited a school, the market place in the camp and chatted with refugees, attending a ceremony with them, together with diplomats and humanitarian workers.

“Stay hopeful stay strong because we stand with refugees,” he said. “It is your day - World Refugee Day!”

“Ethiopia will keep its borders open to people in need of international protection and will encourage others to do so,” Dr. Workneh said. “Tighter borders will not address the root causes of forced displacement; political will and commitment will.”

In a statement marking World Refugee Day, Grandi said the uncertainties of today’s world could make people want to shut their eyes to the plight of those displaced by war, persecution and violence. However, he added that fear and exclusion would only lead to “barriers, alienation and despair”.

This week, UNHCR, the UN Refugee Agency, issued its annual Global Trends report which showed the number of people displaced worldwide had risen to 65.6 million by the end of 2016, its highest level ever.

“On June 20, World Refugee Day, we honour the resilience and courage of more than 65 million people who have been forced to flee war, persecution and violence,” Grandi said.

“But it’s also a moment to recognise those communities and people around the world who receive refugees and the internally displaced in their midst, offering them a safe place, and welcoming them in their schools, their workplaces and their societies.”

Through its work, UNHCR has witnessed the “courage, tenacity and brilliance of refugees,” he added. “Having lost their homes, their work, and sometimes their families, they don’t give up, they find a way to start again.”