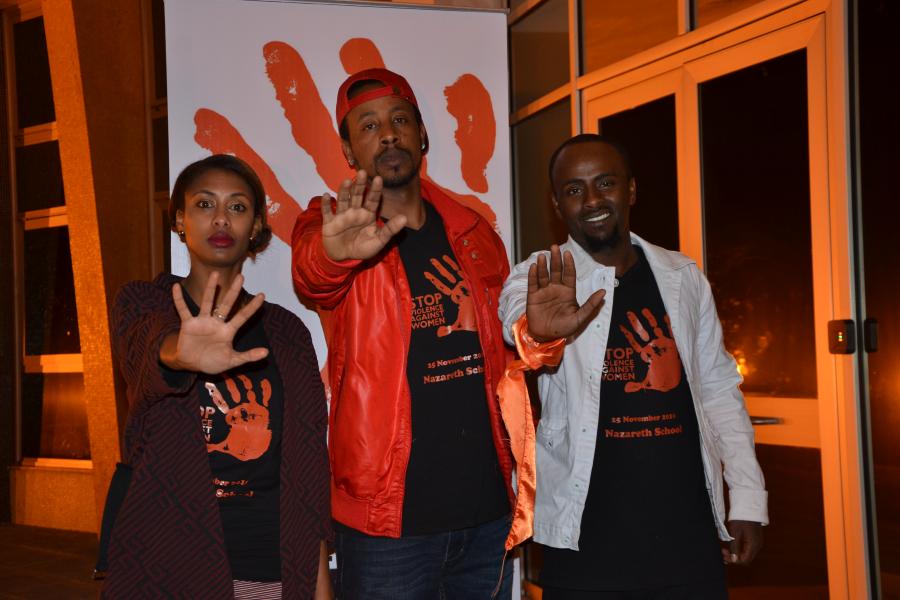 This time of the year, some major landmarks in Addis Ababa become orange. Orange is the color chosen to envisage a bright, optimistic and violence-free world for all women and girls. To mark the United Nation’s annual 16 Days of Activism to end violence against women and girls, UN Women Ethiopia Country Office is supporting a number of activities from November 25 – 10 December. UNECA headquarters building is lit in orange and the African Union building is covered with orange banners. The US Embassy in Addis Ababa also supported the movement by oranging its building.

A national discussion forum on the topic of male engagement to end violence against women was organized by the UN Women CSO Advisory Group in collaboration with Addis Ababa University’s Gender Office and its Male Engagement Club. Held at Addis Ababa University, the event saw a large turnout of university students, professors and gender equality activists. Papers were presented on the topics of violence against women and girls, and the role of men toward ensuring gender equality and prompted heated conversations. A theatrical play on the theme was presented by the Theatrical Arts students of the University and many signed on the HeForShe online movement to end violence against women and girls.

Three up-and-coming Ethiopian singers, Betty G, Lij Michael and Sami Dan took the stage and answered questions posed by students from private and public high schools in Addis Ababa at an event to commemorate World AIDS Day and 16 Days of Activism on 02 December in the United Nations Compound. In Ethiopia, more women and girls are impacted by AIDS than men and boys are, and the prevalent violence against women and girls is a contributing factor. “Men should never, ever use force with women. When she says no, we have to learn to walk away,” Sami Dan said. Betty G added that “We women should not look at ourselves as victims, but instead as strong beings.” All three artists pledged to use their influence to inspire the ending of violence against women and girls among the youth.

On December 05, Letty Chiwara, UN Women Representative to Ethiopia, AU and ECA met the three artists and students from Nazareth Girls’ School outside the orange UNECA headquarters to acknowledge their support to this year’s campaign and thank them for their efforts.