More than ten million people are in need of assistance according to the Government and humanitarian agencies. 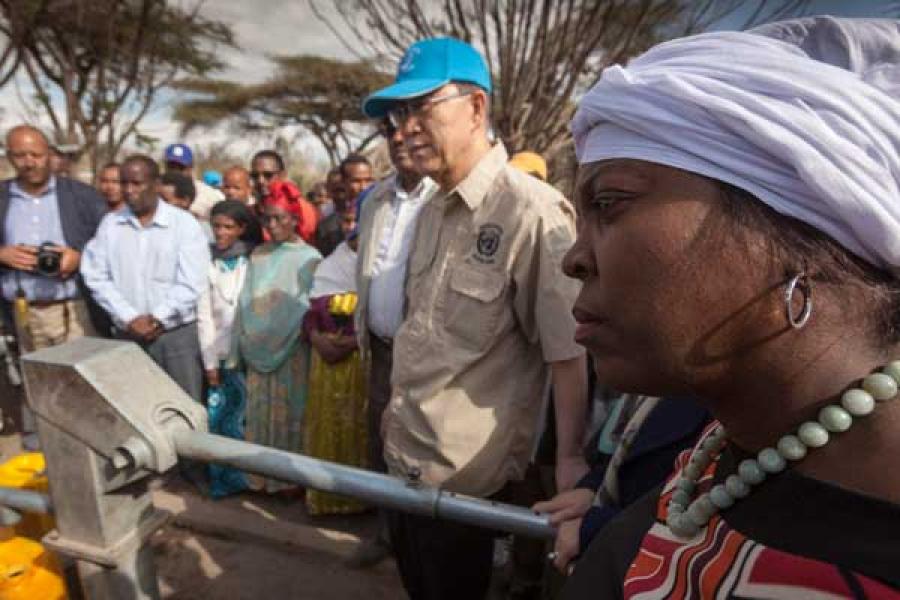 Ban Ki Moon underlined the importance of the Government for its leadership in the drought response.

Ethiopia is in the grip of its worst drought in recent history. More than ten million people are in need of assistance according to the Government and humanitarian agencies. On Sunday 31 January, the UN World Food Programme (WFP) Executive Director Ertharin Cousin and UN Secretary-General Ban Ki-moon visited Ethiopia to see first-hand the consequences of the drought in one of the worst affected areas.

Humanitarian needs in Ethiopia have tripled since early 2015 as severe drought in some regions, exacerbated by the strongest El Nino in decades, caused successive harvest failures and widespread livestock deaths.

Acute malnutrition has risen sharply, and one quarter of Ethiopia’s districts are now officially classified as facing a nutrition crisis. Out of 10.2 million people now requiring urgent humanitarian assistance, WFP is tasked with supporting the government in meeting the needs of 7.6 million people in 2016.

Rahima Dadafe, a 23-year-old mother of four, is holding her youngest son, Nebiyu Jemal, age 1. She says the family is surviving on food assistance from the government, along with the special nutritious food from WFP to help baby Nebiyu recover from malnutrition.

“When the rain stopped raining, our crops failed and our livestock started dying because there was no grass for them to feed on. I had three cows. They all died. Now we are (living on) the assistance from the government.” she said.

During their time in Ethiopia over the weekend, WFP’s Executive Director and the UN Secretary-General visited a drought-affected area a few hours from the capital.

Ban Ki Moon underlined the importance of the Government for its leadership in the drought response.

Earlier in the day, while attending a high level roundtable on the drought in Addis Ababa, the Secretary General stressed that a crisis of this scale “was too much for any Government”. “The international community must stand with people of Ethiopia, immediate support for Ethiopia will save lives and avoid preventable suffering. Immediate support will also safeguard the impressive development gains that Ethiopia has made over the past years and decades,” he said.

“We can avoid this crisis to get worse by meeting the needs of families today”.WFP’s Executive Director Ertharin Cousin

UN WFP Executive Director Ertharin Cousin asked the international community to act before it is too late. “We have an opportunity to provide help but we do not have the resources”.

“We can avoid this crisis to get worse by meeting the needs of families today”.