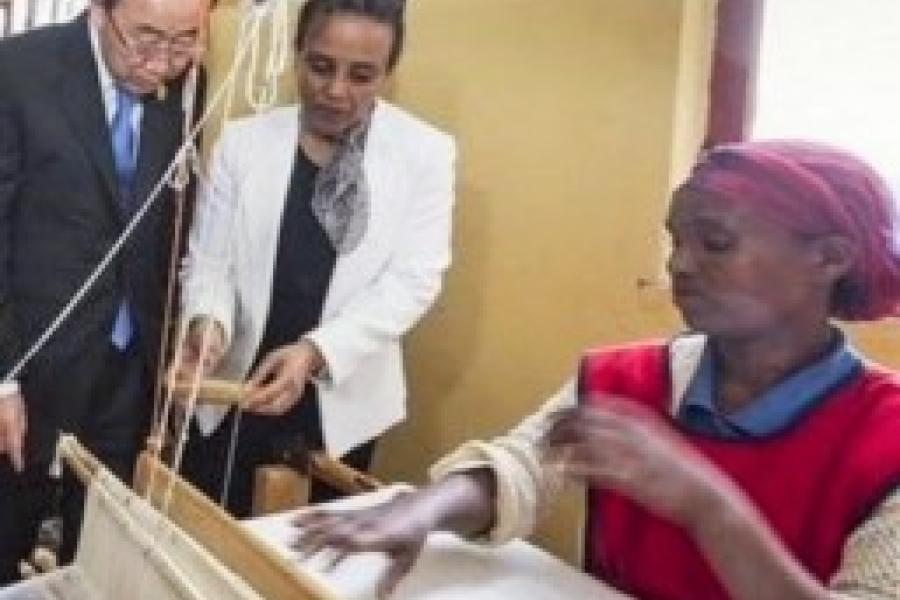 The secretary general was accompanied by his Special Adviser on Post-2015 Development Planning, Ms. Amina Mohammed.

Ethiopia’s First Lady Roman Tesfaye was also on hand to join the site tour of the project, which was launched by her office back in February 2014 in partnership with the Center for Accelerated Women Economic Empowerment (CAWEE) and the Entrepreneurship Development Centre- Ethiopia to target 1,500 women and female youth.

Prior to joining this project, the women, mostly engaged in collecting and selling fire-wood, earned on average monthly income of less than US$20; their income has on average increased four-fold and is expected to grow further as they hone their skills further and expand their access to markets.

Single mother of three, Aselefech Abebe, is one of the women who have benefited from this project. Aselefech is a former soldier who fled to Sudan and lived there as a refugee for five years following the change in government back in 1991. Upon her return to Ethiopia she married a weaver and had three daughters. When her husband suddenly passed away, Aselefech found herself without any skills to enable her to make a good living for her young family earning only 8 birr (around US 40cents) a day.

Speaking at the launch of the project, Ambassador David Usher of Canada, had underlined the importance of unleashing the potential of women entrepreneurs, noting that “Access to information and markets are the biggest challenges for many of the female entrepreneurs”.

In 2014 UNDP signed a collaborative agreement with Microsoft East Africa Limited to enhance development activities in the areas of entrepreneurship through helping 200,000 Ethiopian entrepreneurs have access to tools and expertise.

UN Secretary General’s visit to the UNDP supported project came on the sidelines on the third financing for development conference held in Addis Ababa 13-16 July 2015.